Nov. 19: Ethics in Hard Times: A panel discussion for science and health journalists and writers 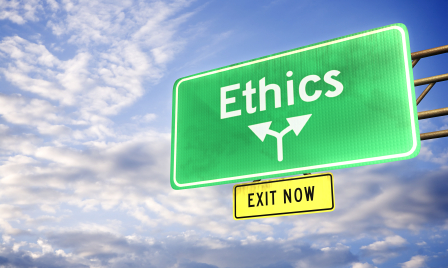 Many science journalists and public information officers have questions about some of the content partnerships and sponsorships that have emerged this past year among news outlets and government agencies and businesses. The National Science Foundation, for example, sponsors online content for such publications as US News & World Report, Discover magazine and LiveScience.com that is usually written by public information officers for research institutions. The cover of Popular Science‘s July issue included an alternative cover sponsored by General Electric that was viewable via a Webcam. In September, the San Jose Mercury News reported that a consortium of 35 U.S. research universities launched Futurity.org, which will “feed their own accounts of their discoveries directly to top news sites on the Internet … [forming] what is essentially their own nonprofit wire service.”

Often, the justification for these partnerships is to get science news to the public during a time of limited resources. In the past few years, and accelerated by the recession, we have seen more newspaper industry lay-offs, the elimination of science sections or the closing of newspapers and magazines and overall, massive journalism job losses.

With cosponsorship from the Association of Health Care Journalists (AHCJ), Science Writers in New York (SWINY) is organizing this panel to discuss: How concerned should we be about these partnerships and similar initiatives? Are they isolated incidents, or a trend? How do they relate to today’s economy and media contraction? Is it more challenging in a recession to maintain ethics, including the classic church/state lines between publicists, advertisers and journalists? Can we still offer strong journalism when we enter these kinds of partnerships and sponsorships with government, industry and academia? Are these relationships transparent enough, or do we need new standards for news outlets that enter such arrangements, or should these never occur at all?

Please join us for this interesting evening.

There is no charge to attend, but seating is limited. RSVP here.

INTRODUCTION:
Dan Fagin, journalist and director of Science, Health and Environment Reporting Program, New York University
A science journalism professor at New York University, Fagin is a nationally prominent journalist on environmental health topics. Twice a finalist for the Pulitzer Prize, he has won the top science journalism prizes in the United States, from both the American Association for the Advancement of Science and the National Association of Science Writers. He is currently working on his second book. His recent publications include articles in Scientific American, New Scientist and Harvard University’s Nieman Reports. At NYU, Fagin is an associate professor and the director of the master’s-level Science, Health and Environmental Reporting Program (SHERP), one of the oldest and best-regarded science journalism training programs in the world.

PANELISTS:
Christine Gorman, freelance writer
Gorman is an independent health journalist based in New York City. She was the senior health and medicine writer at TIME magazine for more than 20 years before heading to Harvard for a 2008 Nieman Fellowship in Global Health Reporting. She is now working on a college textbook and also teaches press ethics at New York University.

Unmesh Kher, freelance writer
Kher is a freelance writer, editor and consultant based in Brooklyn. A graduate of New York University’s Science, Health and Environmental Reporting Program (SHERP), he started out as a rookie working at TIME magazine in 1998 where he wrote and reported stories for the science section of the magazine. By the time he quit in 2007, he had covered everything from international affairs to business, and done quite a bit of editing for the once lively Notebook section of the magazine.

Cristine Russell, president, Council for the Advancement of Science Writing; Senior Fellow, Environment and Natural Resources Program at the Belfer Center for Science and International Affairs at Harvard’s Kennedy School of Government
Russell is an award-winning freelance journalist who has written about science, health and the environment for more than three decades. She was a former national science reporter for both The Washington Post and The Washington Star and is the current president of the Council for the Advancement of Science Writing, a group of distinguished journalists and scientists dedicated to improving science news coverage for the general public. Ms. Russell is also a past president of the National Association of Science Writers and a contributor to A Field Guide for Science Writers (2006).

Shirley Wang, reporter, The Wall Street Journal
Wang is a staff reporter at The Wall Street Journal who writes a twice-monthly column, “In the Lab,” about science and medicine research, as well as about mental health and neurological disorders. She has also covered the pharmaceutical industry and served as one of the lead writers of the newspaper’s online Health Blog. Her first science writing experience came courtesy of an AAAS Science and Engineering Mass Media Fellowship, and her work has appeared in The Philadelphia Inquirer and The Washington Post. She has a PhD in clinical psychology from Yale University.

MODERATOR:
Robin Lloyd, online editor, Scientific American
Lloyd is an online science journalist, currently working at Scientific American. Previously, she was senior editor for LiveScience.com and SPACE.com, part of Imaginova. She has additional experience in print journalism (Pasadena Star-News), wire journalism (City News Service of Los Angeles), network online journalism (CNN.com) and institutional science writing (American Museum of Natural History). She has a PhD in sociology from the University of California, Santa Barbara, and was a Knight Science Journalism Fellow in 1998-99.