Science Writers in New York (SWINY) held two events this Spring. The ABCs of SEO: How to be Search-Engine Friendly and An evening with Gretchen Rubin, were held in conjunction with the American Society of Journalists and Authors. Both events were streamed live over the internet.

The SEO event, held on  March 5th, was moderated by SWINY Board member Amiad Finkelthal. The attendees were provided with an overview of how online pages are structured, including such concepts as title tags, meta descriptions, and header tags. The panel consisted of Amin Tehrani, managing director of Revunami, a digital strategic consulting firm, Lisa Chase, associate director of marketing for the Mount Sinai Medical Center and Joshua Okun, associate director, web services & online marketing for the Brain & Behavior Research Foundation. 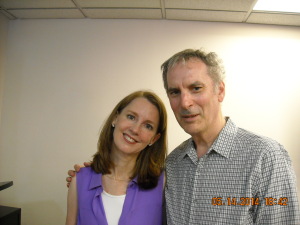 On May 14th, SWINY co-chair David Levine interviewed Gretchen Rubin, author of the NY Times bestseller, The Happiness Project, about her work on happiness and the blog she writes six times a week. Her book sold more than 1.5 million copies in North America alone, has been published in more than thirty languages, and spent more than two years on the NY Times bestseller list. Ms. Rubin has also been named one of the “100 Most Influential People in Health and Fitness.”

This entry was posted in In the News. Bookmark the permalink.